Ever since events such as 9/11, the Lockerbie bombing and the (fortunately) failed shoe bomber, the stringency of airport security has been ever increasing. Anyone who has passed through an airport has no doubt witnessed the occasional swabbing of luggage or electronic items. The staff will take a quick swab of the item, stick it into a mysterious machine and usually send the passenger on their way with little explanation of what has just occurred.

But what exactly are they testing for in this scenario, and just what is the instrument they’re using?

As one might expect, the biggest target of this security step is explosive substances as a counter-terrorism measure, in addition to illicit narcotics in an attempt to crack down on drug trafficking. In an airport setting, the analytical testing technique of choice is ion mobility spectrometry.

Ion mobility spectrometry (IMS) is an analytical technique used to identify chemical compounds based on the differences in the movement of ions under an electric field. The concept for the technique was established in the early twentieth century, however it was not until the 1970s that the instrumentation was actually properly developed. There are currently tens of thousands of IMS devices deployed around the world. Not only are they utilised in airports for drug and explosives screening, but also by the military for the detection of chemical warfare agents and in industrial settings to monitor air quality. The range of applications is potentially vast, but the principles of operation are the same.

As you may have witnessed, a small swab is rubbed over the surface to be tested, typically a piece of luggage or an electronic device such as a laptop, before being inserted into the ion mobility spectrometer. As the sample needs to be introduced in its gaseous form, the swab may be subjected to heating in order to thermally desorb analytes from the swab and allow them to be transported into the instrument for analysis. In order to manipulate the analytes entering the instrument, they must first be converted into ions, their charged form. Ionisation is typically achieved using a radioactive source, such as 63Ni (nickel-63) or 241Am (Americium-241), which first form reactant ion species from the carrier gas (usually air), which then leads to the ionisation of the sample material. These newly-formed ions will then enter a region under an electric field and drift towards a series of electrodes. The ions will pass through the drift region at different speeds depending on the shape and size of the ion clusters and strike the electrodes, the signals being amplified and detected. Depending on the instrument and needs of the analysis, either positive or negative ions will be produced (in some cases both simultaneously). 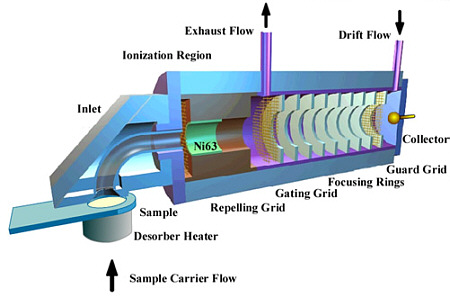 The IMS utilised in airports will typically hold a database of known explosive and narcotic substances against which to compare samples. There will be a certain threshold, typically based on peak intensity, that must be reached before a positive identification will be indicated, and if there is a “match”, the operator will be alerted to a potential identification.

In comparison to other analytical tools available, ion mobility spectrometers are far from being the best. For instance mass spectrometry, an alternative technique for the analysis and identification of chemical compounds, can offer greater sensitivity, higher resolution, improved accuracy and better identification. So why use IMS? It essentially comes down to cost and ease of use. The simple design and ability to operate at atmospheric pressure means the instruments can be fairly small in size, some even being hand-held and so rendering them completely portable. They have low power consumption, so can simply be powered by a few AA batteries. The ease of use of the IMS means anyone can be trained to use the instrument, thus technical or scientific expertise is not required.

But what is perhaps most important for use in an airport setting with potentially thousands of passengers each hour, is the ability to conduct analyses quickly, and this is something that the IMS can offer. Many commercial ion mobility-based instruments can provide results in a matter of seconds. For instance, the IONSCAN by Barringer (now owned by Smiths Detection) boasts the ability to detect over 40 explosives and narcotics in just 8 seconds.

In a security setting there are three primary types of IMS that may be encountered. The smallest of the devices are handheld and sample by drawing in analytes present in the atmosphere. These may be used to analyse potential hazards relating to unattended baggage, for example. The second type, which is perhaps the most commonly encountered IMS in airports, is a benchtop instrument which requires introduction of the sample via some type of swab. And finally, some airport security units may utilise a larger, human-sized IMS portal. This setup uses airflow to dislodge particles of explosives or drugs from clothing or the passenger’s body and analyse them.

Unsurprisingly, the instruments are not infallible, and false positive or negative results are a possibility. Some ions will have the same drift time so may be indistinguishable from known explosives or drugs, triggering an alarm. In actual fact this response may simply have been caused by a cosmetic or pharmaceutical product that happens to produce a response similar to a known narcotic. On the contrary, dirt, oil and other contaminants may mask the presence of substances of interest, thus causing no alert despite the presence of a drug or explosive.

Furthermore, the IMS is somewhat limited in that it can only identify the presence of a compound contained within its database. So whereas it may be able to detect common explosives such as RDX, TNT and PETN, and frequently encountered narcotics such as cocaine, heroin and cannabis, it would not necessarily alert to the presence of an unknown compound (unless it was very similar in chemical structure to something in the database).

Fortunately research in the field of analytical chemistry is constantly ongoing, aiming to improve instrumentation and analytical techniques to resolve these issues and ultimately produce more reliable and robust security measures.