The manufacture and distribution of illicit drugs such as heroin is a primary focus of many major law enforcement organisations worldwide, including the Drug Enforcement Agency (DEA) in the United States and the National Crime Agency (NCA) in the United Kingdom. Unfortunately, as drug shipments pass hands between dealers and cross borders so rapidly, it can be difficult if not impossible to trace a batch of drugs back to an initial manufacturer. As a result of this, the chances of locating and arresting the manufacturers of illicit drugs can be slim.

To a forensic drugs analyst, a whole range of characteristics can be examined and used to classify and compare different batches of the same drug, including physical appearance, packaging, and chemical composition. To an extent, heroin chemical signatures are already beneficial in comparing different batches of the drug in attempts to establish links and possible sources of the narcotics. This may be based on agents or adulterants a product has been cut with, and the relative concentrations of those substances. The manufacturing process itself can vary in terms of chemicals and apparatus used and the skills of the manufacturer, resulting in further characteristic differences in the chemical profile. However these differences may not be distinct enough to be valuable and are certainly not able to pinpoint the country from which a batch originated. Though there is still no reliable method of tracing an illicit drug back to a particular location, ongoing research is aiming to change this.

One method of studying the history and even origin of a sample is to use isotopic composition. Isotopes are different forms of elements that are incorporated into substances in the environment in varying ratios and abundances, influenced by a number of factors that can alter these ratios. These processes can be described as isotopic fractionation. Interestingly, isotopic ratios can be characteristic to different regions of the world, enabling certain materials to be traced back to the geographic region based on the ratios of particular isotopes contained within that material. With this in mind, they have often been used to trace unidentified human remains to a particular location or study the origin of food products. Focusing on isotopes allows for heroin samples to be studied and compared based on regional characteristics as oppose to the variation caused by the production process.

For the first time, researchers at Florida International University have utilised strontium isotope ratio analysis to determine the provenance of illicit heroin samples. 186 unadulterated, undiluted heroin samples of known origin were obtained from a number of geographic regions including Southeast Asia, Southwest Asia, South America, and Mexico. Of a particularly challenging nature is South American heroin and SA-like Mexican heroin, which can be extremely difficult to differentiate based on their chemical compositions alone. Heroin samples were dissolved via a microwave-assisted acid digestion method before being subjected to a technique known as a multi-collector inductively-coupled plasma mass spectrometry (MC-ICP-MS). This instrument utilises an inductively coupled plasma ion source to ionise target analytes, which are then separated and analysed by the mass spectrometer. The use of MC-ICP-MS allows for the strontium concentration of particular samples to be determined. The strontium isotope ratio (87Sr/86Sr) value of each individual sample was then compared with the overall mean values of ratios from different regions in order to establish the likely origin of that particular heroin sample. Samples from the same geographic region would be expected to exhibit a similar isotope ratio. 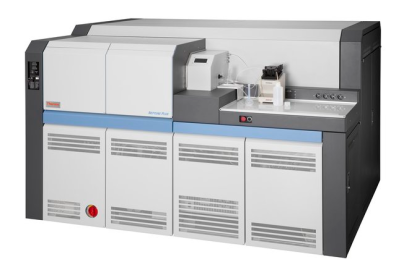 The results demonstrated the possibility of differentiating between heroin of different geographic origin. South American and Mexican heroin samples were correctly classified 82% and 77% of the time respectively. South East and South West Asian heroin samples were somewhat more difficult to differentiate due to more of an overlap between strontium isotope ratio values. SE Asian samples were correctly classified 63% of the time and SW Asian samples only 56% of the time. It is not clear whether this elemental strontium is endogenous or the result of external contamination, but either way it is sufficiently characteristic to be associated with a particular geographic location.

The strontium isotope composition of heroin can be affected by a number of factors, including the soil in which components are grown and groundwater in the area, which can result in region-specific isotope compositions. The use of strontium isotope ratio analysis has presented promising results in the origin determination of illicit heroin. Although a larger scale study incorporating samples of a more worldwide origin would be ideal, initial results suggest that this technique could allow for an unknown illicit drug sample to be traced back to a country of origin, aiding criminal intelligence agencies in the war against drugs.