What is your expertise within forensic science and what does this type of job role typically involve?

Forensic entomology can be divided into three groups: stored-product, urban and medico-legal (or medico-criminal) entomology. I specialize in the field of medicolegal forensic entomology. Generally speaking, forensic entomologists can estimate a postmortem interval (PMI) or time since death based upon the presence (or lack thereof) of insects collected on or near a body. Certain families of insects arrive in a predictable manner on corpses, especially the calliphorid flies (blow flies). Based upon the ages of specimens collected, a PMI can be estimated. Age of the specimens is directly related to the temperatures that the insects are experiencing; the higher the temperature (obviously to a certain limit), the faster they grow.

On occasion, forensic entomologists have to testify in court, just as would any other expert witness. The testimony usually focuses on time of death, but not always. Sometimes a body may have been moved and the calliphorids present can sometimes help determine such a thing. There was a case where a woman was murdered in a parking lot in the city of Jacksonville (Duval County). Her body was dumped in rural Clay County, but not before those city flies had a chance to deposit eggs on her body. The trial was held in Duval County.

In September 2006, I received a call from the Jacksonville Sheriff’s Office that the body of an elderly man had been found in a culvert off of I-10, a major highway. I did not know what a culvert was until this case (for those who do not know, it is a tunnel that carries water under a road). It was necessary to climb down a steep angled wall to make an entomological collection. When I reached the body, I noticed that the man had hundreds of calliphorid larvae around his neck despite a lack of visible wounds or bruised skin. I told the detectives that the medical examiner would find the cause of death to be strangulation. I got a lot of strange looks from the detectives that day, but the autopsy showed the man had indeed been strangled to death.

I guess you could say that being a forensic entomologist requires getting very dirty, too. The first time I ever returned from a death scene, my husband had to have the car detailed because it smelled like human decomposition. But as horrific as it sounds, I continue to be fascinated by what calliphorid larvae can reveal about death and decomposition and how they can help solve crimes.

What led you to become involved in forensic entomology?

I thought I wanted to be a veterinarian, and one of the ways to get into vet school is to major in entomology. On the first day of my first entomology class, the professor handed out an article about the Body Farm in Tennessee. I changed my mind about wanting to be a veterinarian that instant.

What in particular was the focus of your PhD research in forensic entomology?

Historically, calliphorid development rates have been studied by placing a few hundred calliphorid eggs in a cup (or cups) in a rearing chamber set to a certain temperature. The time is monitored as the larvae grow through three larval stages, a puparial stage, and then emerge as adults. 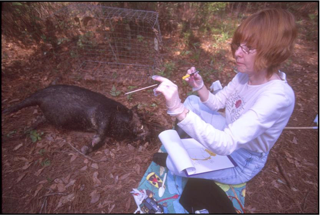 Liver is a standard feeding substrate for calliphorid larvae in colony.  But the small amount of liver needed for only 10 larvae per Petri dish dried up quickly, killing the larvae, so I developed a liver agar feeding substrate that would not dry up1. Then I was able to study precisely how the larvae developed at eight different temperatures.

This was grueling work in which larvae were checked at 4-hour intervals 24/7 for most of the duration of the development research, which took 15 months. As I had no funding to hire anyone to help me, I trained my husband to do it. He took the day shift, going back and forth to the lab every 4 hours as I tried to get some sleep. I spent nights (from 9 PM to 9 AM) in the lab. I was so sleep-deprived that it would have been dangerous for me to drive back and forth during the middle of the night.

I also studied different size maggot masses and their respective temperatures as they grew in age, size and volume. And finally, I studied different models that could potentially be used to calculate age of a larva (or larvae). Most forensic entomologists use a linear model to estimate a PMI, but insect development is not linear, especially that of calliphorids.

Do you believe there are any common misconceptions surrounding this field of work?

There are too many to list, but I will name a few.

Do you think that there are any significant gaps in research in forensic entomology?

Yes. I would say the biggest problem in this field is the poor quality of research, especially when it comes to studies regarding development rates of forensically important insects. Most (almost 80%) of the manuscripts published in peer-reviewed journals in the past 30 years lack replication and have poor experimental design. This is an embarrassment to the science and needs to change. But, there are many dedicated scientists in this field who are trying to do good work.

Finally, how do you feel about the extent to which forensic entomology is harnessed in legal investigations?

Forensic entomology is overlooked much of the time. Collection of insect evidence is not difficult, but as I mentioned above, such evidence is rarely–if ever–collected.

If you’re a forensic scientist (academic or industry) or a crime scene investigator and would like to be part of this series of interviews, get in touch by emailing locardslabblog[at]gmail.com.

This is Part 6 of our series of interviews with forensic professionals.